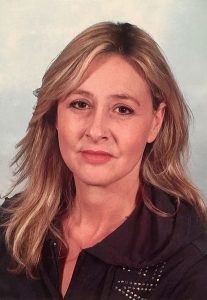 After completing the secondary School of art she study at the Scuola Mosaicisti del Friuli and in 1998 she obtain the Master Mosaicist qualification
After completing her degree at the Scuola Mosaicisti del Friuli in 1998 she started her own company working with both private and public contracts, performing reproductions, copies and independent works in which she pays homage to her mentor Giulio Candussio.
She has collaborated with Bisazza, Sicis, Trend Group, Ars Sacra, Stone, Postumia and many other architects, designers and artists. She has participated in solo and group exhibitions throughout Italy. She also lectures for ARSAP and has received several national awards among which a first prize for the contest “art and the city” in 2000.
The artist is able to interpret different languages through a constant adventure of new shapes and materials. These languages are comprehensive of her own projects and other artist's works.