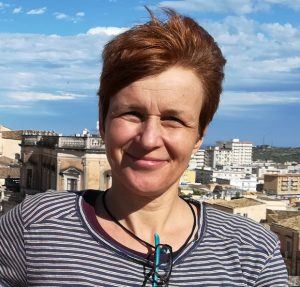 After obtaining the artistic-scientific maturity in Germany he attended the School Mosaicists of Friuli obtaining the title of Mosaicist in the year 1989. From 1990 he owns his own laboratory in Spilimbergo. He conceived and produced numerous mosaic works, including the desired Green panel, flaming Flowers for the barracks of the Fire Brigade of Spilimbergo. He also dedicates himself to the interpretation of works by contemporary artists, of particular importance was the realization, on design by the sculptor Adriana Marcorin, of the wall mosaic located in the entrance of the communal swimming pool of Gemona del Friuli (UD). Collaborates in the production of jewellery with the Goldsmiths Laomi Scanavini. There have been Numerous participations in exhibitions and exhibitions, including ART, held in 2005 in Monza and Fragments at Villa Wasserman in Travesio (PN) in 2007. From 2007 teaches in the introductory Courses to the mosaic art organized by the School Mosaicists of Friuli.