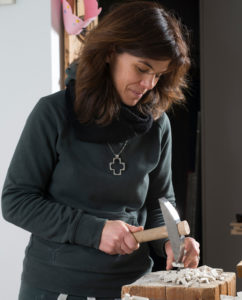 In 1989, she finished her higher education, graduating in accounting, after a visit to the School of Mosaicists of Friuli VI enrolled in obtaining the title of Mosaicist in 1994. Since 1996 is the owner of the workshop of Mosaic Etra, in San Daniele del Friuli (UD). In These years she has devoted herself to the mosaic interpretation of both works of her designs and sketches of her father, the artist Nino Gortan, and of the artist Claudio Feruglio. She has participated in numerous exhibitions in Italy obtaining various recognitions. Awarded at the national competition The framework of small format in Reggio Emilia in 1996 was in the same year reported to the international competition The Friends of the picture of Grazzano Visconti (PC). She also received a report of particular interest in 2007 at the 12th International Art Review of Codroipo (UD). Since 2008 is part of the staff of teachers of the Courses of introduction to the mosaic art organized by the School Mosaicists of Friuli.