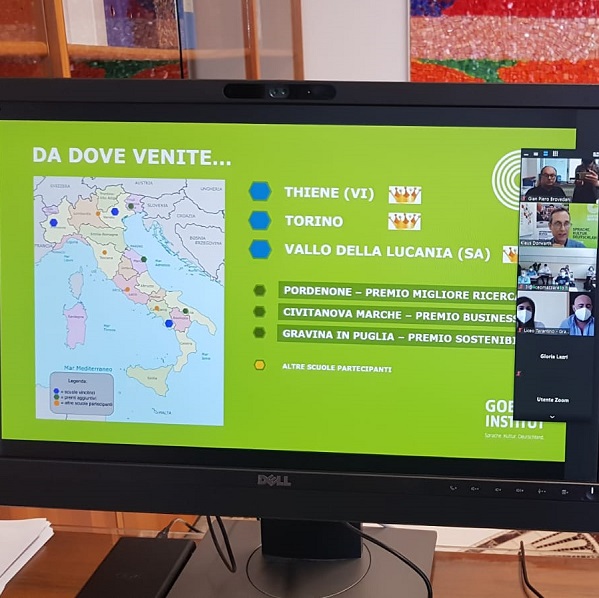 The 4th A – International Relations and Marketing Department of the Mattiussi-Pertini Institute in Pordenone – won the Best Research Award at the Unternehmen Deutsch – Piazza Affari Tedesco 2020/2021 competition promoted by the Goethe Institut at national level.
The Goethe Institut competition was the pretext to bring the educational environment and the world of work closer and stimulate the creative and entrepreneurial spirit of the participating students. The goal was to create a new product and an advertising spot to promote it, collaborating with local companies.
4ªA-RIM developed its project throughout the school year by collaborating with the Scuola Mosaicisti del Friuli which has virtually become a business partner. Established in a company, called Deuma, the class immediately understood the importance of structuring itself efficiently, clarifying its production environment, establishing the customer target and analyzing how the market was willing to accept the proposed proposal. This research work, at the basis of effective marketing, was the aspect that the Goethe Institut jury considered most interesting, worthy of being awarded.
The pandemic and distance learning, if in many respects have made the project more complicated, however, have allowed the encounter with realities that are difficult to approach by a simple group of students.
The students as “new entrepreneurs”, supported by the director of the Scuola Mosaicisti del Friuli Gian Piero Brovedani, got in touch with the Italian embassy in Berlin, with the Municipality of Pordenone, the Pordenone-Udine Chamber of Commerce and Confartigianato Imprese FVG. Both the Municipality and Confartigianato gave their patronage to the project and the embassy in Germany provided contact with Mr. Alfonsi, director of ICE Berlin (Italienische Agentur für Aussenhandel) and his collaborators, including Mrs. Nicole Röder (Trade Analyst Consumer Goods). The advice and information received thanks to the availability of dr. Brovedani and dr. Alfonsi who believe in their work and who know how to pass it on to young people with professionalism, passion and generosity.
Through videoconferences with Germany and meetings, also in presence, with the reality of Spilimbergo, the students tried to put into practice the strategies to develop a real market research, in double foreign languages ​​(German and English). In synergy with ICE Berlin, architects and interior designers from northern Germany were involved and this made it possible to probe the German-speaking market regarding mosaic as an artistic technique for creating advertising signs for both public and private businesses.
The strength of this project is that the students experienced it as a real experience where everyone has found their role within the company. The 4ªA-RIM class, adhering to the Goethe Institut proposal, started thinking about its business from the first days of November 2020. He created a logo, developed letterhead and visit card. Then there were the tasks undertaken and carried out by each member of the company: the director, Massimiliano Dreon, who coordinated the various activities assisted by the deputy, Matteo Melosso; the secretarial staff, Gioia Cancian, who were entrusted with reports and statistics, and Maximilian Terry; the head of communication Amra Seferovic who kept in touch with the Scuola Mosaicisti del Friuli, with the Berlin subjects and the various bodies consulted; the representatives of the marketing sector involved in the advertising launch, Oxana Sviderschi, graphic designer, and Eleonora Bertiato, director and advertising scriptwriter; the IT support offered by Luca Cesaro and Nicola Cammarata.
The appreciation received by the Goethe Institut repays the 4ªA-RIM class for the moments of uncertainty and difficulty of a certainly tiring school year and confirms the quality of a project that for the students was a test of work as well as a satisfying experience. 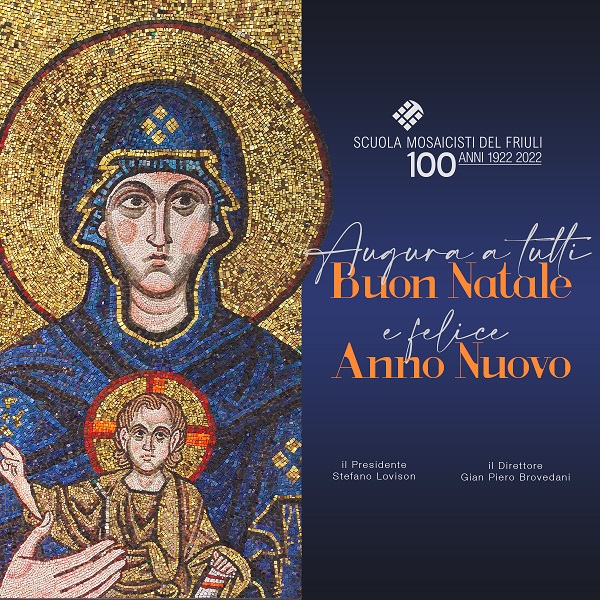