“From the Karst to the sea” the great mosaic of Monfalcone 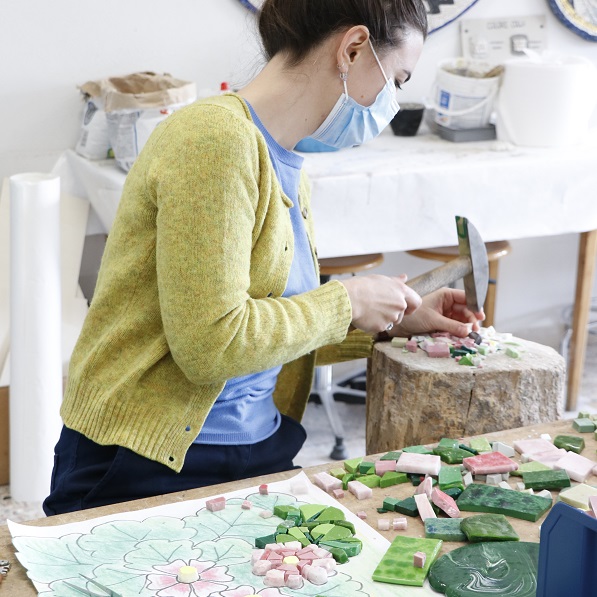 An urban intervention, not only decorative, but also didactic: this will be the large mosaic that the Municipality of Monfalcone has imagined for Piazzetta Montes, entrusting its construction to the Scuola Mosaicisti del Friuli. It is a panel that, developing for 12 meters, presents the variety of the territory of Monfalcone: the transition from the karst to the marine environment, biodiversity with numerous species of plants, the countryside and representative anthropogenic elements such as the fortress and boats. sailing boats that animate the Gulf of Panzano.
The work was strongly desired by the Councilor for the environment and quality of life, Professor Sabina Cauci, and will enrich an open space, lived by the community.
Architect Sergio Valcovich is responsible for the vast design which manages to synthesize the complexity of the landscape, without neglecting the detail of native plants or characterizing natural elements. Hence the didactic purpose of the work, expressed through clear and simple images, to which reference can be made to leave the historic center of Monfalcone and enjoy the trails on the stony hills of the Karst up to the tree-lined and sandy coast.
In Spilimbergo, in the workshops of the Scuola Mosaicisti del Friuli, the first stages of processing the large mosaic have begun. The design and planning of the execution has provided for a division into parts of the work that are individually composed and which will later be assembled. It was decided to use Venetian enamels for the tiles, which have bright and lively colors, particularly vibrant in the light. Cut one by one, the tiles are applied on paper according to a method developed and patented in France in the mid-nineteenth century by Gian Domenico Facchina from Sequals. The architect Charles Garnier entrusted him with the mosaic decoration of the Paris Opera, an imposing and burdensome task that Facchina, with his collaborators, masterfully completed thanks to the reverse technique on paper. Transmitted to the Scuola Mosaicisti del Friuli through a collaborator of Facchina who was mosaic master, this technique was fundamental when, in the 1930s, the School was commissioned to create over 10,000 square meters of mosaics for the Foro Italico, in less than five years. It was also used for the decorative enterprise of the Church of Saint Irene in Likovrisi-Attikis near Athens in the 1980s (1160 square meters of mosaic which, as in the ancient Byzantine churches, affects walls, floors, arches, vaults, altars), a decade later for the dome, in the Greek Orthodox part, of the Holy Sepulcher in Jerusalem (345 m2) and the list could also include other overseas assignments.
Even today taught to students and used by professionals who leave the School, it is an extremely versatile technique that allows shared execution, easy transport and coating of large surfaces.
Once completed, the mosaic for the City of Monfalcone will be placed in Piazzetta Montes where it will be placed directly on site on suitable wall supports. This last phase will give all citizens the opportunity to follow the installation activity and to appreciate the artistic and craftsmanship behind it, made up of care, patience and attention, capable of combining the knowledge of tradition with the needs of contemporary life. 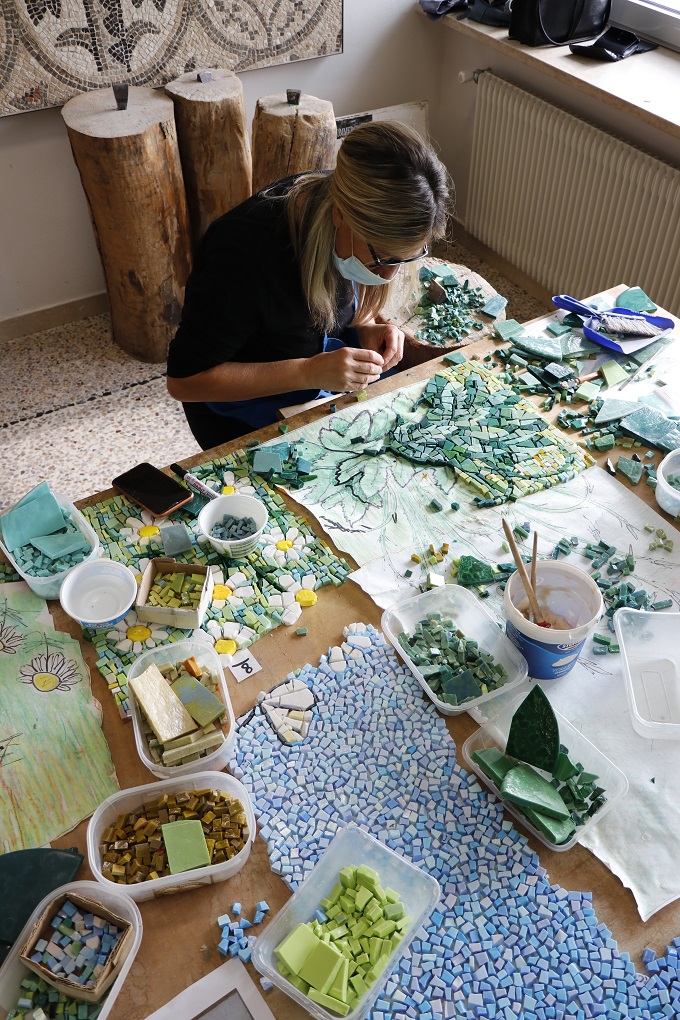 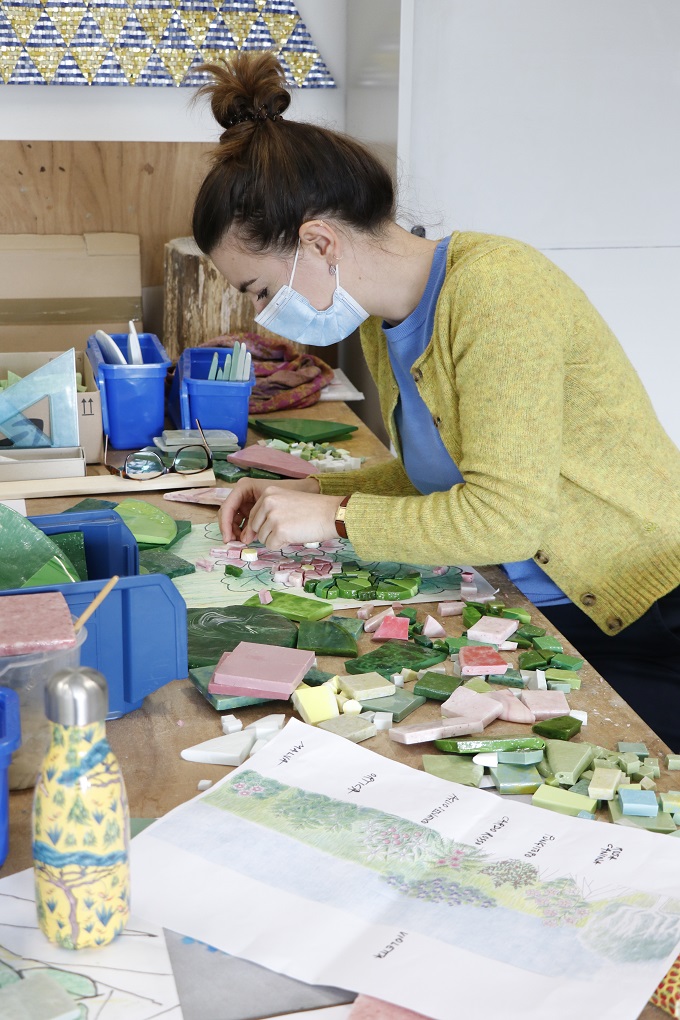 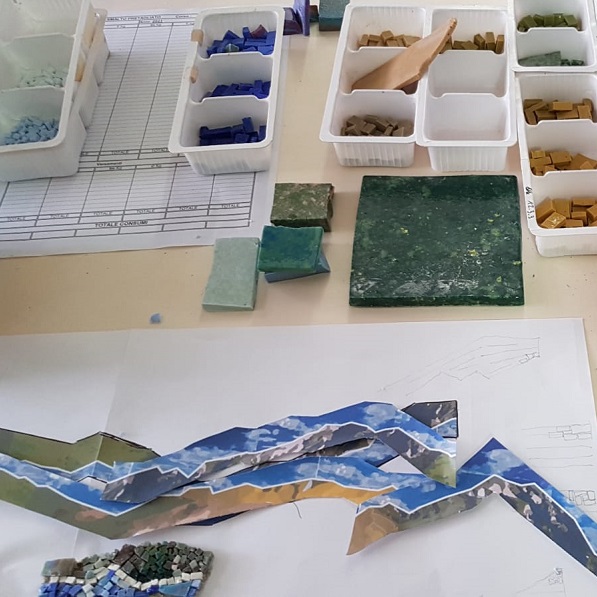 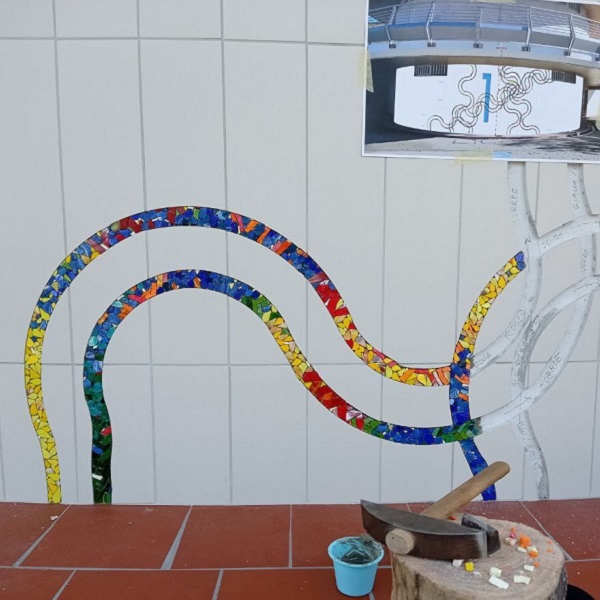 Press conference for the mosaic in Lignano Pineta 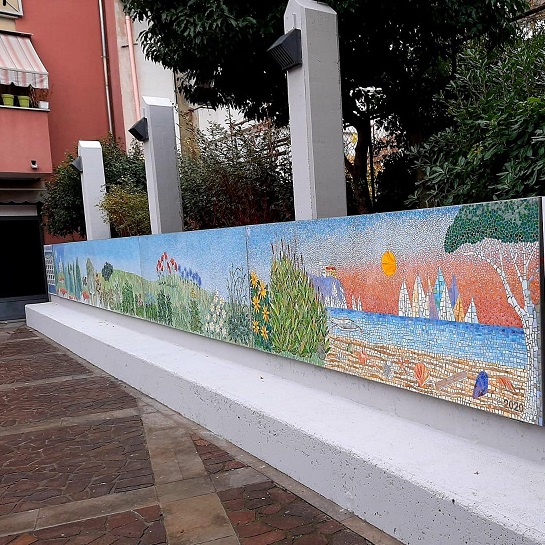 From the Karst to the sea: the great mosaic of Monfalcone