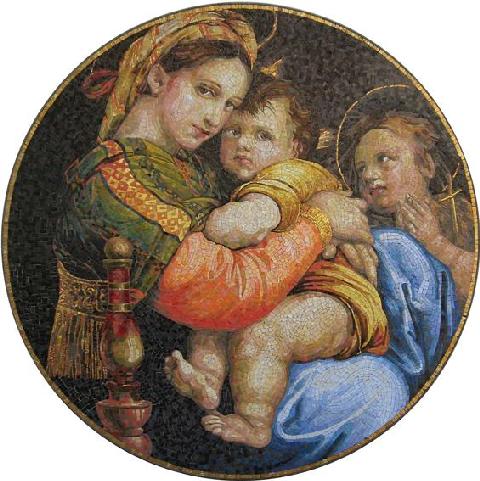 The famous work of Raffaello Sanzio, the Madonna della seggiola, is here interpreted as a mosaic. In Raphael’s panel painting, datable to 1513-14 and now kept in the Palatine Gallery of Palazzo Pitti in Florence, the traditional subject of the Madonna and Child is proposed as a domestic scene of familiar sweetness: a mother, sitting on a chair, who she hugs her son under the gaze of the infant Saint John.

The mosaic work respects this sweetness, as does the construction of Raphael’s painting. The patterns of the tiles enhance the chiaroscuro and the volumes of the subjects. The Madonna seated on a chair hugs her Child to her chest and bending her head forward arches her back and creates a protective envelope with her bust. This posture in opposition to the equally arched one of the Child’s body, conveys the idea of a movement, as if the chair were moving like a rocking chair. To the side, San Giovannino with folded hands looks at the scene and shares in its tenderness.

The bright colors of the painting are slavishly translated with the tesserae and the pupils stopped to re-propose even the motifs of Mary’s shawl with its embroidery and golden fringes.

The technique used for the mosaic interpretation is the reverse on paper which is the traditional technique of the School, imported by master Andrea Avon from France where it was developed by Gian Domenico Facchina of Sequals.