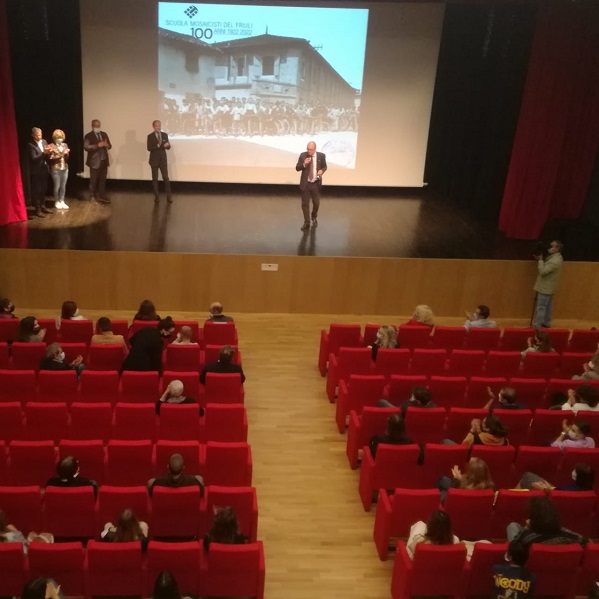 The training year 2021/2022 of the Scuola Mosaicisti del Friuli opened with the traditional inaugural ceremony. From the stalls of the Miotto Theater in Spilimbergo, the students, teachers, staff of the School, together with local authorities and administrators present, listened to words of good wishes and encouragement from the guests present: the regional councilor for finance Barbara Zilli, the MEP Marco Dreosto and the mayor of Spilimbergo Enrico Sarcinelli.

Stefano Lovison, president of the Scuola Mosaicisti del Friuli, in his initial greeting proudly recalled the school’s hundred years: on January 22, 1922, in fact  in Spilimbergo, a new institution opened its doors to prepare young Friulians for a profession, that of the mosaicist and terrace. A constant and continuous commitment of the School in training mosaic masters who then worked, and still work, in every part of the world. A unique school, where the art of mosaic is taught, added the director Gian Piero Brovedani looking at the present situation, which this year has more than sixty students from fourteen countries (Russia, Lithuania, China, South Korea, Bolivia, Ivory Coast …) and from different regions of Italy. Over half are women, proving that the traditionally male mosaicist craft has managed to keep up with the times not only in terms of style and technique.
The director then cited the regional sector law of 1988 with which the administration of the Friuli Venezia Giulia Region affirmed the peculiarities and value of the Scuola Mosaicisti del Friuli, recognizing its activity in the field of training, promotion and production. of the art of mosaic.

Link with the past and attention to the present: this is the combination that characterizes the School and that the mayor Sarcinelli remarked also looking at the role of the Municipality of Spilimbergo. In the 1920s it was the enlightened mayor Ezio Cantarutti who made sure that the School was located in Spilimbergo and today the Municipality wants to continue to be close to the School, also for the centenary celebrations, aware of the importance that the School has for the territory at a cultural and economic level, “a flagship” to be proud of.

From the political observatory in Brussels, MEP Marco Dreosto highlighted how the School constitutes an international center that attracts interested young people from all over the world, without distinction of gender, language, culture. Each student brings his wealth of knowledge, his habits, his approach to the future, yet a common goal is that which cancels, in the name of daily commitment and passion, distances and differences.

Councilor Zilli’s words concluded the ceremony. In confirming the specificity and high educational profile of the School, the Assessor addressed the students in particular, encouraging them to cultivate, through mosaics, art and beauty that will characterize their future profession. She then recalled the roots of mosaic art that found illustrious examples in the region, precisely in Aquileia. “Our region is a composite reality”, she said, “it is a mosaic and you know how to interpret it well”.

The opening ceremony of the formative year is the first appointment in the wide calendar of events and appointments that will develop throughout 2022 to celebrate the achievement of the school’s hundredth anniversary: ​​it is clear right now that the occasion of the centenary does not it will only serve to remember the past, but above all to plan for the future. 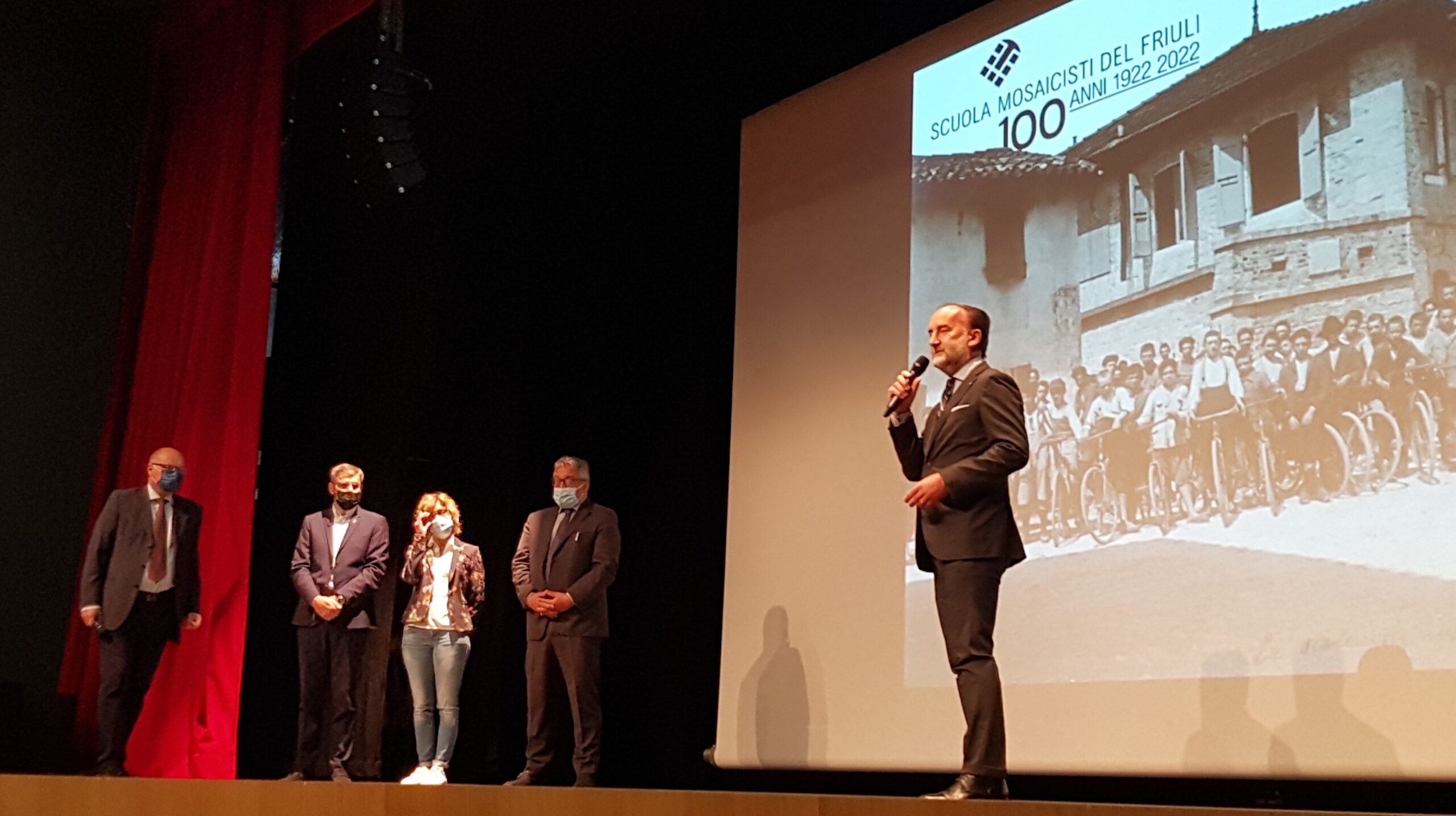 The president of the Scuola Mosaicisti del Friuli Stefano Lovison at the microphone, from the left the School director Gian Piero Brovedani, the MEP Marco Dreosto, the regional councilor for finance Barbara Zilli and the mayor of Spilimbergo Enrico Sarcinelli.